FISHJONESBEACH --  A PLACE FOR ALL TO EXPERIENCE, LEARN AND SHARE -- FISH YOUR WAY!

If your all for blue crabbing, snappers and fluke the give the Captree Fishing Piers a shot.  It easily reached at the end of Jone's Island at the very end jof ocean parkway just stay left before the Robert Mosses bridge.  From the lot you can park relatively close to either of its two piers and start fishing.  There is also a very nice bait and tackle that stays stocked with all the bait and tackle you will need during the fishing season.  Also if party boat fishing is your thing there is a nice fleet to choose from which head out regularly for full and half day trips for pretty much anything that is running in season.  There is also a big comfort station with a restaurant above and fast food below.  It is a very family friendly place with a play ground for the kids when the get antsy with the fishing.  To get to the long pier stay left of the go around when you enter, to fish the rectangular pier stay right of the go around when you enter.  I have done most my fishing there on the long pier because the rectangular one has been closed for quite some time but they may have opened it as now.  After Super Storm Sandy the park got a lot of money and redid the long pier and they may have finished the rectangular one too. 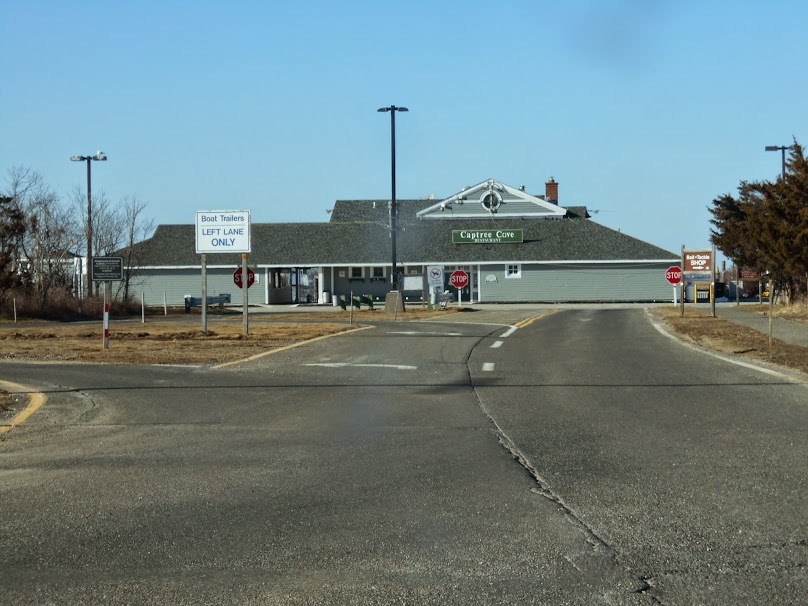 The Captree Cove Restaurant and Concession Stand as You Enter

The main long pier which starts at the end of the dock where the part boats moor is relatively long and stretches I would guess 2-4 football fields straight across and narrow.  It is quite roomy and comfortable with a bench which extends most it's length and you can fish from either side of the pier.  There is a serious current which swipes past here if your between tides.  In that current there will be a ton of sea weed that will make you leave cursing certain days especially when you get near the full and new moons.  If this is your first time fishing here check your tide and moon phases because the current and weed can make it tough to fish.  Try to set up about two hours before the high or low and you should have four hours of good fishing.  You'll have days when it is not all that bad but I'm just putting this out there so there are no surprises.  There are ways to fish around this but well get to that in another article.  The pier has been know to fill up and I have seen it crammed with a dozen anglers cramped in one corner casting at the same niche of water.  If you need to get away from the crowd if one builds up, you can find spots along the shoreline to the far left of the park going towards the drawbridge or to the right of the pier is a nice stretch of beach which leads to the Robert Mosses bridge.  The stretch from the rectangular pier to the bridge is a nice piece of sand to cast from at times and you'll find some bass there with plenty of fluke mixed in.  It does not fill up all the time but if you head out on a weekend during the summer months keep this in mind.  Most of the time if you go in season during off hours and weekdays you should be able to find you own piece to yourself.  You can park there in the day but if you plan to fish at night to get away from the crowd be sure to get a night fishing permit from the park office.  They will come by and check and leave you a fine if you don't have one. 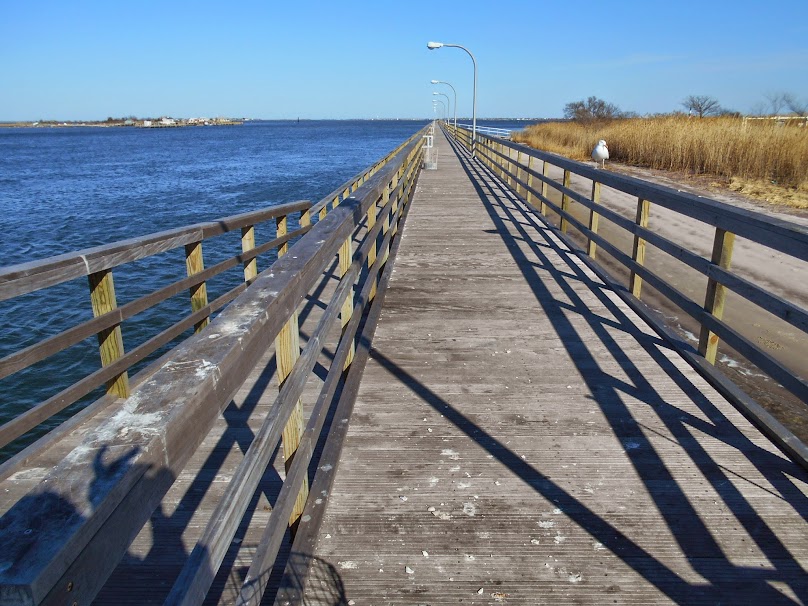 The Long Fishing Pier at Captree, Great for Fluking and Crabbing

I have to start with the blue crabbing at Captree because it is exceptional to say the least during the month of July and early August.  You will easily catch your limit of blue claws with a couple of traps and the bait shop has plenty in stock of all shapes and sizes if you get into crabbing to the tenth degree.  Bring a long hand net too, because one thing the current is great for is shooting blue crabs past the pier in the swift current.  You will be surprised how many you will see zip by you ready to be scooped up while fishing.  This is one case you want to be fishing in the full bore current if you looking to manually long net the blue claw crab.  My advice for the crab would be to bring a few traps and a net.  The traps work best when the current is slow, then when the current picks up, grab the net and scoop away.  I will assure you there will be plenty to see if you have not done this before.  The snapper blues here congregate in great numbers and its a wonderful place to bring a kid and introduce them to fishing.  Grab a snapper wapper at the bait shop, which is just a float popper with a tube on the end or just float some spearing with a bob'er out to the willing snapper blues.  There's some good snapper action here at any point on the pier from the month of late July, peaking through August and into September.  In recent years there has been a good number of kingfish here as well.  They like to stay on the bottom so use a bottom rig preferable with a slip sinker and about a foot of leader with a small size 6 or 4 hook and tiny piece of clam if there around.  They give a nice little fight and if your lucky some get around four pounds.  I have had some great days with the fluke on this pier.  It's quite relaxing and very easy access if your not looking forward to a hike and just want to relax.  Most of the fish you will hit are shorts but you should hit a nice number of keepers if you put your time in.  I have landed a few fluke on the Captree Pier over 28" so don't rule catching some doormats out, they are there.  At the far end of the pier there is a nice rip which shifts year to year along with the eroding beach there.  It holds a nice batch of fish.  The rips to the right of the pier, you will see it and try fishing along its edges.  There are some bluefish which pass threw here as well.  I have caught plenty of bluefish around this rip.  At night I have caught stripper and weakfish but fishing for these two can be tough in the day cause of the crowd in addition the bite better after dusk. 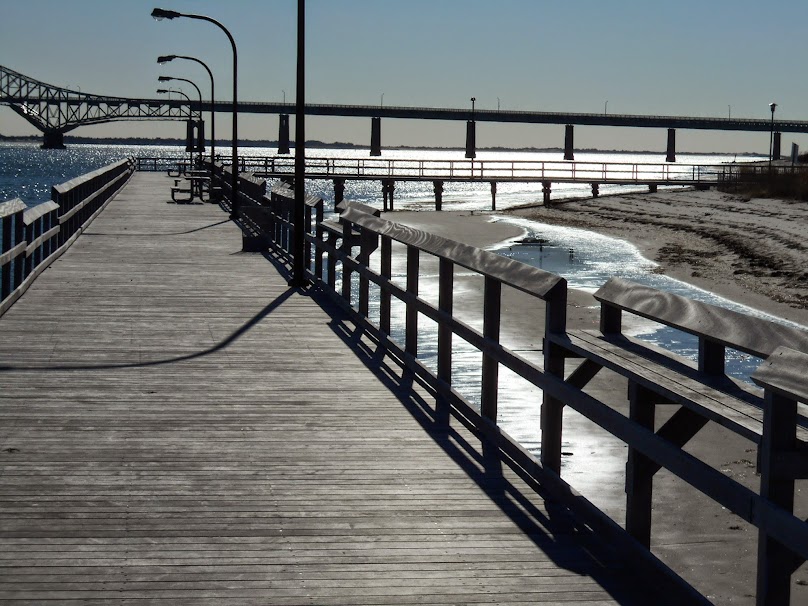 The Small Pier Over Looking The Fire Island Bridge

Of course there are many other species of fish that you can run into here like blowfish, seabass and blackfish but pretty much the pier is great for blue claw crab, snapper blues and plenty of small fluke with some nice keepers in between.  Its a great place to bring the family, it has amenities to keep spouses and kids busy if they lose interest and even a nice place to bring a date and watch the party boast come in and out while having dinner or drinks.  There is always a reason for me to come back here year after year and a very enjoyable place to spend the day.