Bring your Korkers and please be careful!  This is a great place to fish but at the same time very dangerous!  There can be any number of accidents occur on the jetty from broken bones, sprained ankles, open gashes, drowning and embedded hooks.  I have heard of two particular instances of death.  One incident I heard of a few years ago a man logged his pyramid sinker on the rocks, with all his might and 60lb test loaded, the pyramid sinker can winging back at 200mph and hit him in the head like a bullet.  Another instance I heard of someone simply slipping off in the jetty in cold water with waders on washed slowly off with the strong inlets current and slipped under and drowned.  I have had severe accidents out there myself and believe me it is a long walk back with a sprained ankle and forget about walking with a broken leg, so please be careful when you fish there and always safety first!

Now that we went through the disclaimer we can get to fishing on the jetty itself.  Some will say its part of West End II but I like to think of it as its own piece of water.  There are a whole different set of rules to fish on a jetty and many guys walk past all the bars, cuts and pockets on the open beach just to fish the jetty so we gave it its own section here.  I will do the same, I have a jetty bag, rod & reel, and equipment I will bring when I know I am going to make a beeline past the beach to fish it.  Jetty fishing is a different mind set of fishing then beach fishing and your fishing tackle should reflect that. 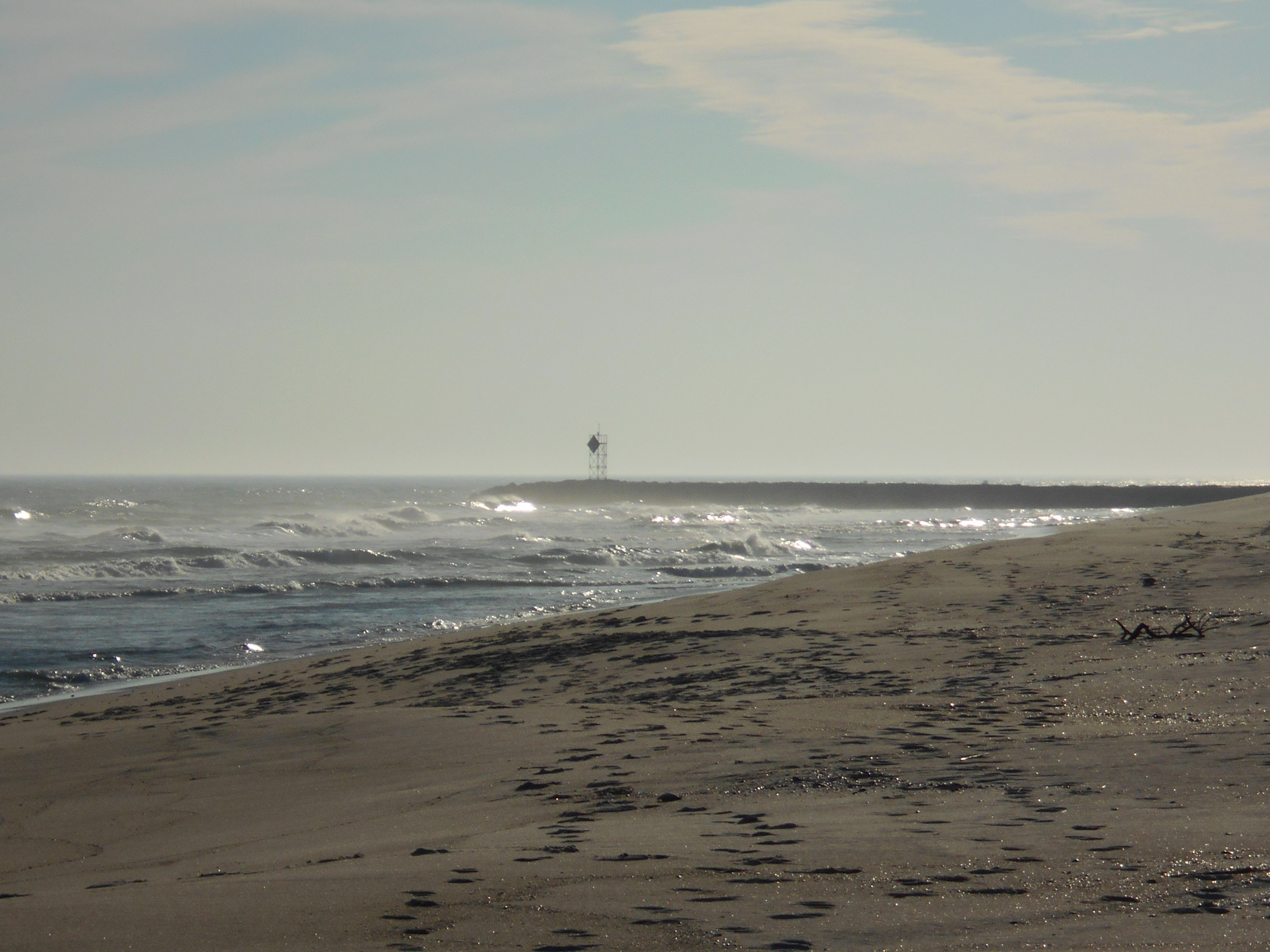 To get to the West End II Jetty you can go one of 2 ways.  Both ways you can park in the West End II parking lot.  If you park at the close corner of the first entrance there is a trail which cuts across the dunes to the inlet and you can walk strait up from there.  You will eventually see it as it forms the end of the rock wall leading to it.  The second way is to park in the right corner of the lot coming in and walk along the sandy trail leading to the beach.  At the beach you will see the jetty to your right.  Its about a half mile down the beach.  As a side note for future reference, we will try to make some maps and photos soon to add to these articles, we are working on the content now which is most important to you we believe but we will have some photos and maps added later.  It is a nice walk either way you go, you can plan on 15-30 minutes pending on your pace and remember you are walking through sand and mosquitoes have been know to be notorious here.  Some guys prefer to go the first way and walk along the rocky break wall over the sand.  Distance wise the second way I believe is quicker and I like to switch it up and change scenery myself when I walk there.  You may be pleased as most fisherman scorn the walk and most times will only be a handful of anglers out there, but at times I’ve seen twenty or more folks fishing depending on the time of the year or day of the week.

The jetty although made of huge boulders and rocks changes every year to year from storm to storm.  In fact its being rebuilt as this article is being produced.  The super storm Sandy in October 2012 did a number on it.  It actually made a clean break 3/4 the way out.  Every year I go out I see the boulders shifted and moved and just expect it to change from slight  to drastic after a major storm.  But the fish are always around it, you just have to adapt as it changes year to year.  There used to be a nice deep pocket on the left side of it looking out from the beach which was one of the best holes in long island, last year that side of the jetty you were able to walk around sand in your waders if you felt like braving it.  Point is it changes just as much as a sandy beach either on a large or small scale.

The fishing to be had on the jetty can be fantastic and as usual some days and tougher to fish then others.  The stripped bass will school up around it in early fall and there has not been a year past where you'll see them break water in the distance slowly moving towards the jetty giving you the opportunity to hit a bunch of nice size bass with no blues in a short period of time.  Of course you'll have blues mixed in most the time but its very bassy around the jetty with some 40lb plus fish being caught through the season.  If you fish with bait please be respectful of the bucktailer's, jigger's and plugger's, as a line drop set in the middle of a rhythm of anglers casting on a sweet spot can dampen the action for the whole crowd.  If on a day I do plan to throw bait I don't like to let it sit still but let it drift slowly with the current slowly keeping up slack, bring the bait in and casting out again.  Just keep a minds on on the guy next to you.  You will also find you'll hit some nice keeper fluke in with the mix when your fishing for bass up there and there plenty of fluke around it in the summer as well with plenty of keepers to be had if you target them.  The fluking around the jetty can be just as top notch as it is in the inlet.  The like to ambush their prey from sandy cover behind boulders in the current and you’ll even see them take swipes at your lures when the water is crystal clear.  One of my favourite fish which come to this jetty in swarms is the triggefish.  In the high heat middle of summer there is a three to four week period when the trigger fishing is phenomenal.  I have had plenty of days when I left them biting only thinking later in the middle of winter I should have stayed longer and caught a few more.  There are some triggers with some nice size that come up too, I have caught some well over six pounds.  Just keep in mind you will have to carry back your catch and fifty pounds of trigger fish get heavy after the first 1/4 mile.  But they are willing bitters and can fill that gap when the summer doldrums peak.  Another great opportunity although it varies year to year is the blackfishing.  In early to late October there’s a good chance of 10lb class blackfish showing up.  I have seen some side by side with strippers on the jetty and it is a beautiful site.  I have had days where I limited out on blackfish in about an hour withh four to eight pound blackfish.  Try different crab baits see what works and there are plenty of crabs to be found around the rocks.  You will see folks rounding them up.  Round up a few dozen and don't be afraid to share some crabs!  The bluefishing action on the jetty is pretty steady in peaks and drops from late April to November.  the peak of the bluefishing is from May to June and again September to October.  Of course you'll find them through the middle month and April and November as well but I have just found the peak seasons for them there is early spring and early fall.  You hit them in all shapes and sizes too and there are days you catch them literally on anything but when there around I will just use a plain old beat up cheap diamond jig and tube because you will find yourself burning through tackle like mad.  To save the best for last this is the spot to try for some false albacore.  I warn you it can be a narrow period of time they will stick around and a tough fish to entice to bite but they do show up and I have seen them but I have not yet to hook into one yet.  You will know the albacore are there because you'll see anglers walking back with their heads down grumbling about em, and when you get out there you’ll see them break water.  Its a brief period of time in early fall you will run into them and they only stick around for a few weeks at most and a very tough fish to hook into.  They move quick in and out so your luck to get a cast into them to begin with.

To finish up remember safety first and be careful out there.  Don't jeopardize your life or another for a fish.  Adjust your tackle and techniques suited for the jetty and take advantage of all the great fishing it has to offer.